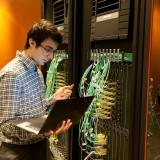 A morbidly obese mum has lost 54kg after struggling to fit in a pair of size 22 jeans.

Sharon Gauld says she was left "red faced" after realising she could no longer fit in a pair of XXL trousers.

The English mum-of-one, from Wolverhampton, West Midlands, decided enough was enough and ditched her serial snacking routine for good, overhauling her diet completely.

After joining The 1:1 Diet by Cambridge Weight Plan, Sharon, who was originally 124kg, lost 54kg in just 12 months.

The 51-year-old, who is now a size 10, said, "When I realised the size 22 trousers didn't fit me something just clicked.

"I had always been the 'big' one in my friendship group and had tried every diet under the sun before turning to The 1:1 Diet."

What Sharon used to eat:

She revealed that she was a "serial snacker" and used to eat family packets of chips after dinner.

"I refused to buy size 24 clothes even though that was my size. I would always snack on crisps and chocolate and my portion sizes were three times too big.

"But after starting my diet at the end of 2018 I had lost almost half my body weight within 12 months," she said.

"I would turn to crisps and chocolate whenever I felt even slightly hungry.

"My portion sizes were also way too big as I'd eat three times the amount I needed at dinner time. I feel and look like a different person now though and some people I worked with didn't recognise me.

"I had some people ask if I was unwell as my weightloss was so dramatic but I was thrilled that I was finally losing weight.

The manager at a college, said: "Ian didn't have as much to lose as me but he has lost 1 stone [approximately 6kg] too which is great.

"We now need a balanced diet and enjoy walking together which is something I could only dream of before as I felt so breathless.

"I now weigh 10st 7lbs [approximately 67kg] and I couldn't be more proud of myself and my new figure."

With additional reporting by Caters.