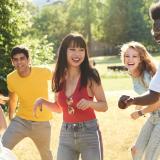 LeBron James and Luka Doncic made their NBA bubble debuts in a scrimmage Thursday night.

But it was Dion Waiters who stole the spotlight in his first game back in the NBA after his exile from the Miami Heat.

With starting point guard Avery Bradley skipping the NBA bubble, the Lakers signed the maligned guard to fill out their backcourt depth. He looked ready for action despite having only played three games this season.

Waiters subbed in late in the first quarter and sunk this pull-up 3-pointer at the buzzer to give the Los Angeles Lakers a 29-22 lead over the Dallas Mavericks.

That wasn’t his first splash in purple and gold. Shortly after subbing in, Waiters made sure to get a look at the basket.

Waiters Island is BACK 🏝 pic.twitter.com/PIS5QxaTbM

With Bradley out and Rajon Rondo shelved with a broken thumb, the Lakers are going to need Waiters to contribute as they set their sights on an NBA championship. The Waiters who got suspended three times by the Heat this season before being traded to and released by the Memphis Grizzlies isn’t going to help.

No rust for LeBron, Luka

Of course he wasn’t the only player with noteworthy highlights in a high-octane first half that saw the Lakers lead 55-44 while playing abbreviated 10-minute quarters.

LeBron goes behind his back and finishes at the rim for the @Lakers! #WholeNewGame

Meanwhile, Anthony Davis logged 12 points and two steals. Both teams were hot from the field with the Lakers shooting 63 percent and the Mavericks connecting on a 53 percent clip.

Lakers head coach Frank Vogel said before the game that the first half would be it for his stars with plans to sit James and Davis after halftime.

The Mavericks won, 108-104 in large part thanks to Seth Curry hitting all six of his 3-point attempts.